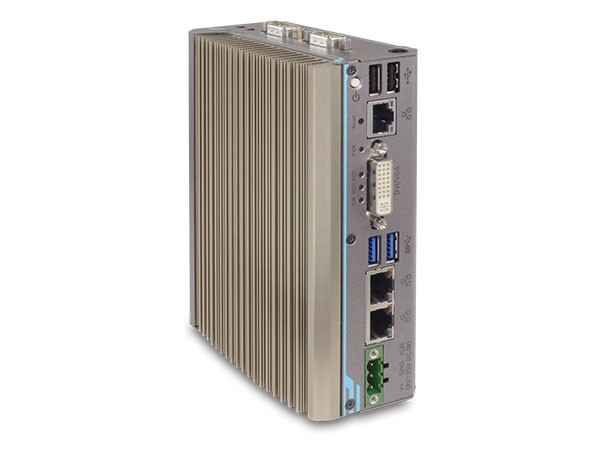 Experience the giant leap with our Intel® Apollo Lake Pentium® and Atom ™ platform !. The POC-300 series features the latest Pentium® N4200 and Atom ™ x7-E3950 quad-core processors, which offer 1.5 times the processor performance and 3 times the graphic performance compared to the previous Atom ™ E3845 CPU ,
The POC-300 series has a sophisticated mechanical construction that combines an ultra-compact design with a chassis that can be mounted on DIN rails with accessible I / O on the front. It comprises a complete computer system, including GbE, USB 3.0 / 2.0, COM ports and mSATA storage in a compact 5.6 x 15 x 11 cm size. The IEEE 802.3at PoE + - function is available on 2 of its 3 GbE ports to operate cameras for machine vision or surveillance applications. The POC-300 series also features the MezIO ™ interface from Neousys for easy functional expansion through versatile MezIO ™ modules.
The fanless design makes the POC-300 series from Neousys extremely reliable in harsh environments. With its numerous I / O accesses and its compact size, the POC-300 is a fanless controller designed for various industrial applications.