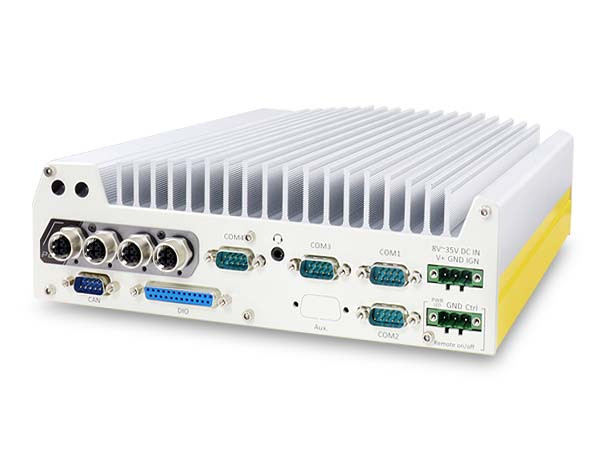 Intel® 8th / 9th-Gen Core ™ in-vehicle controller with 8x RJ45 PoE + ports, DIO, CAN bus and RAID
The Nuvo-7108VTC is the reissue of Neousys' world-famous fanless embedded computer, which is known in 2018. The system is operated by 8th generation Intel Core i processors from Coffee Lake and complies with the specifications of EN50155. It has x-coded M12 connections, two SIM slot designs, 4x USB3.1, 4x USB3.0, COM connections and more.
The system has an integrated CAN bus for connection to an in-vehicle CAN bus system, independent control units or other motor vehicle devices. The isolated digital I / O offers sensor / actuator control, ignition power control and the storage concept with two drive slots (RAID-capable). This makes the Nuvo-7108VTC the most powerful controller that can meet current and future applications in the vehicle.
Powered by an Intel® Coffee Lake Core ™ processor powered by the advanced Intel® Q370 chipset, the Neousys Nuvo-7108VTC offers outstanding performance for emerging high-end requirements than previous generations.
Nuvo-7108VTC has a patented thermal design of passive cooling that allows the hot components to be distributed so that the thermal condition is averaged for each area. The fanless embedded computer from Nuvo-7108VTC can be operated in a wide temperature range from -25 ° C to 70 ° C (100% CPU load).
The Neousys Nuvo-7108VTC offers four 802.3 PoE + ports of an M12-X-coded connector for the power supply of 25 W. The M12 connector can ensure connectivity in shocking / vibrating environments. In addition, the X-coded connector M12 not only offers a higher nominal voltage and surge voltage, but also offers faster data transmission than the A-coded connector
CAN bus is a vehicle bus standard that enables microcontrollers and devices to communicate with the in-vehicle CAN bus system, individual control devices or other vehicle devices in applications without a host computer. The built-in Nuvo7108VTC CAN bus supports the bit rate of up to 1 Mbps for both CAN 2.0A and CAN 2.0B.