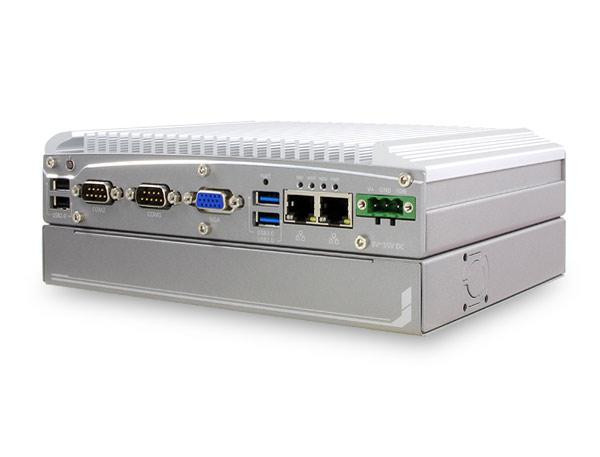 The fanless Nuvo-2500 series are computers with Intel Bay Trail processors. Operated with a Quad Core Bay Trail processor, the Nuvo-2500 from Neousys can show its exceptional computing power and is even more energy efficient than its predecessors. The Nuvo-2500 supports the operation of two independent displays, a double storage functionality to separate system and data, 2x Gigabit Ethernet ports, 4x COM and 4x USB ports.
Equipped with a PCI or PCIe extension, the Nuvo-2500 still offers a very compact design. The dimensions are only 205 mm x 146 mm x 76 mm. The expansion slot is located in the patented expansion cassette. The patented design reduces the thermal influence of the installed card. This makes the Nuvo-2500 compact, expandable and stable.
Wireless communication such as 3G, LTE, WiFI and BT are supported by the internal Mini PCIe socket with USIM socket. Furthermore, the Nuvo-2500 from Neousys is equipped with additional I / O interfaces. This includes 4x isolated digital inputs, 8x isolated digital outputs, 6x PWM outputs, 1x quadrature encoder input and 2x ADC. The expanded I / O interfaces enable simple sequence and speed control for different types of motors. The Nuvo-2500 is perfect for controlling various devices or connecting them to the cloud.

Compact and yet expandable

The Nuvo-2500 from Neousys offers 1x PCI or PCIe expansion slot in the patented Neousys expansion cassette. The patented design makes installing an additional card very easy. The patented Neousys expansion cassette is also characterized by its intelligent design of 3-level thermal management. The first step is to reduce the possible thermal impact of the mezzanine card on the entire system by isolating the mezzanine card in the cartridge. The tailor-made heat spreader can direct the main heat source on the additional card to the chassis. For certain high-performance mezzanine cards or critical environments, an optional intelligent fan is the last stage to actively remove the heat in the case. With the patented Neousys expansion cassette, the size of the Nuvo-2500 is only 205 mm (W) x 146 mm (D) x 76 mm (H). The Nuvo-2500 is the most compact fanless bay trail computer with 1x PCI or PCIe expansion slot and ensures a balance between size and expandability.

MAIO, which stands for multi-function automation of the I / O, is available as an option for Nuvo-2500. MAIO contains 4x isolated DI, 8x isolated DO, 6x PWM, 1x encoder and 2x ADC. With the MAIO option, the Nuvo-2500 can access many industrial devices such as EMG buttons, solenoid valves, LED light masts, Hall joysticks and even different types of motors. The MAIO is designed on board and the expansion slot is available for a proprietary communication card or a standard eldbus card. The Nuvo-2500 is ideal as a controller for industrial applications.