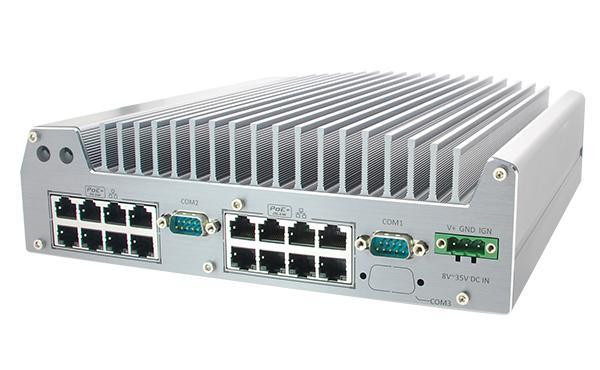 Get individual price by e-mail
Description Technical specifications Datasheet and downloads
Description
The Nuvo-3616VR is end-of-life, which means that it is no longer produced by the manufacturer.... more
Close menu
Product information "Nuvo-3608VR"

The Nuvo-3608VR from Neousys is the world's first monitoring platform that supports a i5 processor and RAID in a compact, fanless case, 8x PoE + ports. It was developed to meet the requirements of a stationary or mobile surveillance system. The system is not only able to record videos, but also to perform high-end video analyzes.
A typical surveillance system uses NVR to connect IP cameras and record the video streams on its disk array. Similar to an NVR system, the Nuvo-3608VR from Neousys offers 8x PoE + ports and a built-in disk array for video recording. Each of its 802.3at PoE + ports provides up to 25.5W to operate a sphere, dome or PTZ camera. The Nuvo-3616VR also includes RAID for 4 drives to expand the storage capacity up to 8TB. In contrast to standard NVR systems, the Nuvo-3608VR from Neousys comes with a quad-core i5 processor, which offers outstanding computing power with which even sophisticated video analysis algorithms can be calculated.
The Nuvo-3608VR includes Neousy's ’tested fanless architecture to enable operation at extreme temperatures. Two of the four 2.5 ″ drives can be easily replaced using the patented Neousys slots. The Nuvo-3608VR supports input voltages from 8 ~ 35 volts and an ignition control for stationary operation or operation in vehicles