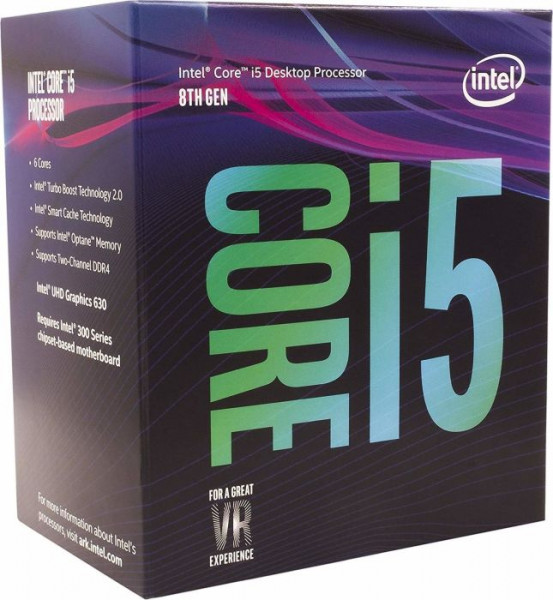 The Intel Core i5 desktop processor provides significantly more PC power and speed for multitasking at work and at home. It adapts intelligently to increased power requirements. Even with demanding applications - such as games or image editing - it keeps pace with you.

The Intel Core i5-8500 has a clock frequency of 3.0 GHz, which can be increased to up to 4.1 GHz if required by Turbo Boost 2.0. However, it should be noted that the boost clock rates vary depending on whether the CPU is 1-core, 2-core, 4-core or 6-core, which means that the optimal performance can always be extracted from the Coffee Lake CPU, allowing the user to determine what performance is available for games or applications. The L3 cache has improved to 9 megabytes and the Thermal Design Power (TDP) is 65 watts.

A key difference between Coffee Lake and the Skylake and Kaby Lake generations is that Coffee Lake is designed only for the fast and efficient DDR4 memory. The quad-core processors therefore support a maximum standard clock of 2,400 MHz, whereas the six-core processors allow up to 2,666 MHz standard clock. The LGA 1151 from Intel is retained as the socket, but it is imperative that a mainboard with a 300 series chipset is used, otherwise the processor could be damaged due to the changed power supply.

In direct comparison with the 200 series, the 300 series can convince with an optimized power supply for the entire CPU, which has improved the overclocking possibilities. The integrated graphics unit has also been optimized in terms of clock and drivers and has now been given the name Intel HD Graphics UHD 630. With its 24 execution units, it offers more than enough graphic power for Intel Quick Sync, GPU computing and of course the one or other game in between. Furthermore, the DirectX 12 graphics unit with feature level 12_1, OpenGL 4.5 and OpenCL 2.0 also supports the playback of 4K, UHD resolutions at 60 Hz via Displayport - provided a corresponding motherboard is available.

Related links to "Intel® Core™ i5-8500 Processor (9M Cache, bis zu 4.10 GHz) FC-LGA14C"
Technical specifications
Socket 1151 v2 (LGA) Codename Coffee Lake-S IGP Intel UHD Graphics 630... more
Customers also bought Customers also viewed
Customers also bought
Customers also viewed
Viewed
This website uses cookies, which are necessary for the technical operation of the website and are always set. Other cookies, which increase the usability of this website, serve for direct advertising or simplify interaction with other websites and social networks, will only be used with your consent.
Decline Accept all Configure